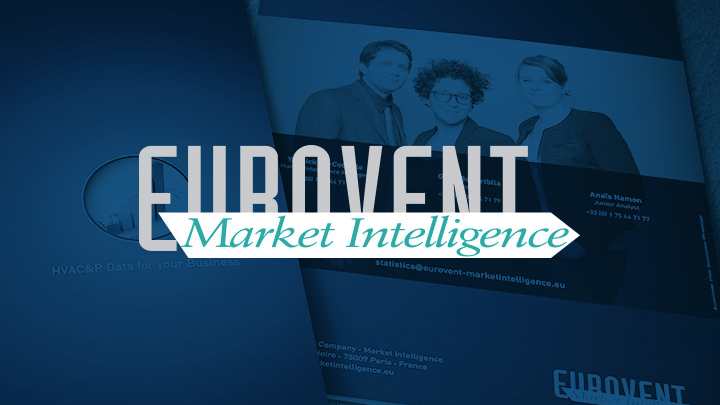 GEN – 805.00. Eurovent Market Intelligence (EMI), the European reference for HVACR market statistics and an independent subunit of the Eurovent Association, has just released results of its studies on 2016 HVACR sales in Europe, the Middle East and Africa (EMEA). The results are based on real sales data. EMI provides annual and quarterly results, market trends and analyses, and makes reassessed data available for non-manufacturers. The number of participants has tripled during the last 5 years and reaches today around 300 manufacturers worldwide for 12 programmes.

After a good growth in 2015, the fan-coil market stabilised in 2016 at 1.61 million units (+3% growth) in the whole EMEA zone. We could highlight the good sales growth in Turkey and Russia, at +40% and +15% respectively. The markets in Spain and the United Kingdom are still growing (+20% and +7% respectively) and are relatively stable in countries like France and Germany. In Italy, however, which accounts for almost 20% of the fan-coil market in the EMEA zone, sales fell by -4% and were at c. 318,000 units in 2016.

In terms of capacity and technology, medium-capacity units between 17 and 120kW, are the ones with the highest sales figures in Europe. Reversible rooftop units are most common in Europe with a market share of c. 65%.

As regards installation, new build accounts for 64% of the European market as opposed to 36% for renovation. Also evident is a great predominance of commercial use, accounting for 62% of units.

The air handling market in Europe in 2016 was up to 1.9 billion Euros, 409 million of which were in Germany, 321 million in Northern Europe, 220 million in Eastern Europe, 130 million in Turkey and 131 million in Russia and the CIS. As in 2015, the market remained stable within the European Union. In contrast, the market fell in Russia and the Middle East, with decreases of c. -20% in these regions, and in Africa where the market lost -15% of its value. There was a sharp fall in Germany in 2015, but now the figures seem to have stabilized. Germany is still the world leader in this market, accounting for almost 20% of the turnover, followed by the Nordic countries at almost 15%.

Within the European Union, the type of exchanger is divided almost 50/50 between plate and wheel exchangers, compared to just 5% for run-around-coil and heat pipe exchangers. Almost 40% of the units sold are compact.

The chiller market reached 24.5 million kW in the EMEA zone, 16.5 million of which was in the European Union.

In Europe, there is a clear segmentation among the different powers. Small and medium-power units are sold mostly in the south of Europe. As in previous years, Italy/France/Spain have a preference for machines under 700kW. Italy kept its position as market leader with a share of 25%. France and Spain came next with market shares of c. 12%. As regards machines over 700kW, the structure is different: Turkey is leader with a market share of 15%, closely followed by Germany at 13.5%.

Market evolution is not particularly favourable for France and the United Kingdom, which underwent falls of -12% and -20% respectively. As for Spain, Italy and Germany, the situation is stable, with growth rates ranging from -2% to +2%. Outside the European Union, Russia saw a fall of -10% in its market.

From the point of view of technology, air cooled non-ducted chillers clearly predominate, accounting for 80% of the market. If we exclude powers under 50kW, which includes residential heat pumps, and focus on medium and large capacities, half the market is composed of “cold only” non-ducted chiller production groups, of which 7% have an indirect free-cooling system, and c. 15% “cold only” chillers.

Italy leads the way with 5,300 units sold, followed by Germany at 4,630 units and then France and the United Kingdom at roughly 3,800 units each.

As for Computer Room Air Conditioners, there was a fall of -10% in comparison to the previous year in the European Union: in Spain and Portugal the fall was -12%, while the sharpest fall came in Italy at -24%. By way of contrast, Benelux and France were in good health, with growth rates of +8% and +6% respectively.

In the EMEA zone, two-thirds of the units sold are direct expansion while the others are chillers. This proportion is the same for numerous countries in the area except France and Germany, where more chillers are sold, accounting for just over 50% of sales. As regards power, 50% of the chillers sold are over 60kW while 60% of the direct expansion units are under 30kW. Furthermore, we can see an upward trend in CRAC units with a modulating compressor (14% of units sold) and the free-cooling option (4%). On the TLC market, free-cooling already accounts for half of the units sold.

Just like in previous years, the filter market remained stable in the European Union at almost 950 million Euros. Germany was once again leader with a market share of 19%, followed by the Scandinavian countries at 14% and close behind, France at 12%.

As far as growth is concerned, Sweden and France stand out with high growth rates of +20% and +12%. Germany, the United Kingdom and Denmark shrank by around -2%. The situation in Russia, Africa and the Middle East, however, is decidedly gloomy, with falls of over -10%.

90% of the European market is still mainly based on replacement.

After a slight fall in 2015, the heat exchanger market stabilized in 2016 with a total of 990 million Euros in the EMEA zone. This stability is due to France and Spain, while the market in Italy and Germany fell by -6%.

Outside the European Union, Russia had the largest market share at 10%, followed by the Middle East at 9%.

Contrary to previous years, air-cooled exchangers gained market share and in 2016 accounted for 25% of the market. The rest of the market consists of evaporators (45%), condensers (22%) and CO2 and air exchangers (8%).

As for application, the market is still dominated by commercial (29%) and industrial (19%) refrigeration, with just 17% used for comfort (central heating, air conditioning, etc.); machine renewal accounts for 66% of the market in the EMEA zone, compared to 34% for new build projects.

The cooling tower market shrank by c. -5% this year in the EMEA zone. If we take a closer look at the reasons for this trend, we see that the evolution is somewhat mitigated – France, Germany and Spain fell by up to -20% while the situation improved in other countries, such as the United Kingdom and Turkey, with growth rates of c. +12%.

The market leader in Europe is Germany at 11%, followed by Italy (9%) and close behind, Turkey (8%). Outside Europe, the Middle East has a market share of 12%.

The technology of cooling towers remained unchanged in Europe: open towers still account for almost two-thirds of the market in comparison to closed towers. In some countries, such as Belgium, it is the other way round, while in France and Turkey closed towers sell slightly more than open ones. As for the power installed, most installations (60%) are under 10 cells, while only 2% are over 50 cells. Larger powers are found mainly in Russia and its ex- satellite countries (CIS), and also in Finland and Turkey.

The chilled beam market was up to 65 million Euros in Europe in 2016, 28 million of which were in Northern Europe (the largest market), around 6 million in France, 3.2 million in Italy and 2.8 million in Germany. The European market grew by c. +10% as a whole. This was mainly due to impressive growth – over +20% – in Sweden, Italy, the United Kingdom and Ireland. We could also highlight the good growth, around +15%, in Eastern Europe. This increase was nuanced by the fall in the Russian market (which fell by over -20%) and in the French and Turkish markets (-5%).

As for the types of chilled beams, active units accounted for over 90% of the market. Among these, 73% were integrated and 27% exposed. This market is essentially based on new build, as renewal accounted for only a quarter of the units sold.

The pool dehumidifier market remained relatively stable in 2016. The single flow market grew to 6,400 units in the EMEA zone (i.e. around 60% of the market), of which 1,500 were sold in France and 1,300 in Germany. The market for double flow dehumidifiers (40% of the units) shrank by -8%, with 4,800 units sold in the EMEA zone. Once again, the largest markets were Germany and France, with 660 and 550 units sold respectively.

All related documents and articles can be found in the respective sections in the right side bar.